Behind the AML-THB Project is a diverse and dynamic team, bringing together many years of experience and expertise in the fields of security and law enforcement, law and legal affairs, good governance, financial administration as well as project planning and management. 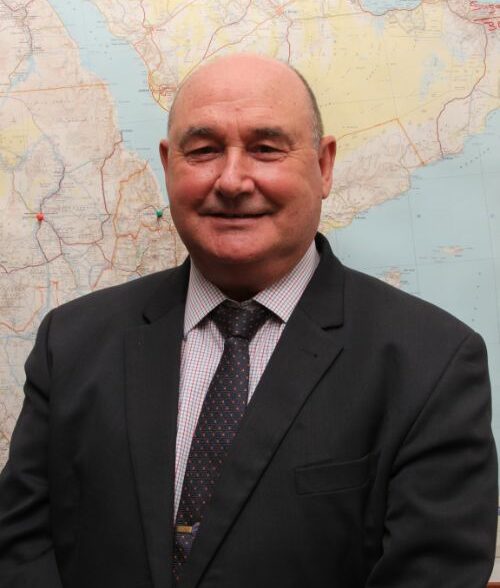 A former High Commissioner of Police, Frédéric has over 35 years of extensive experience in policing and security issues, starting in France and, over the years, in other parts of Europe, most regions of Africa, the Middle East and South America. He has in-depth experience in the Horn of Africa, having worked as the French provost Marshall of the Operation ‘Restore Hope’, covering Djibouti and Somalia. Frédéric has worked in anti-terrorism efforts in France, Lebanon, Somalia, Syria, Israel, Romania, Moldova, Kosovo, Bosnia, Guyana, Greater Horn of Africa and the Indian Ocean nations.

Continue Reading
Before joining this project, he was the Kenya Technical Key Expert for the EU funded three-year Regional Law Enforcement support project. He is a former Airlift country manager for Anti-Terrorist Operations in Niger, Mali, Chad and Burkina-Faso. Frédéric also worked as a French Ministry of Interior Attaché in the French Embassy in Bucharest for Romania, Moldova/Transnistria.  Being a post graduate in Public Finance and Accountability, Frédéric is also an Engineer in private/public Security and Safety Engineering. He has a Masters’ Degree in Crisis Management and a Public Law degree.

Federico has more than 19 years of worldwide working experience, particularly in the Eastern and Southern Africa region, and the Caribbean, in Institutional Strengthening and Capacity Building activities, development, conflict prevention and post-conflict reconstruction. He has extensive knowledge in Project Management – Result based approach and planning, particularly in the framework of EU funded projects. Previously, Federico has worked in UN-Peace Keeping Operations, as Liaison Advocacy Officer in Brussels in the Development sector, as well as in EU electoral political analysis missions in West Africa and Latin America. He also has extensive knowledge on human-rights and civil society participatory strategies.

Continue Reading
Over the years, Federico has garnered extensive experience in Good governance and the Development agenda. He has been involved in democratisation processes, judicial systems reform, legal aid and enabling access to justice.  Before joining this project, he was the Project Manager in Kenya of the EU funded project “Anti-Money Laundering/Countering Financing of Terrorism covering 10 countries in the Greater Horn of Africa (AML/CFT project in the GHoA). 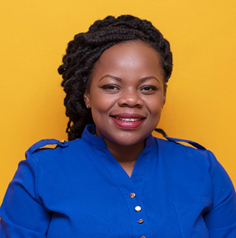 Alma is an advocate of the High Court of Kenya. She serves in AML-THB as a senior technical advisor and editor-in-chief.
Alma has previously worked as the Head of Counter financing of Terrorism and Anti Money Laundering at the Joint Counter Terrorism Analysis Centre where she was involved in carrying out financial investigations; carrying out financial crime risk assessments; conducting investigations on transnational organised crime linked to terror financing; mapping out the country in relation to terrorism financing; creating financial profiles of individuals and entities; liaising with external partners through Mutual Legal Assistance (MLA); and liaising with relevant institutions.

Continue Reading
She has engaged in various consultancies including conducting training in Money Laundering and Terrorism Financing in Sri Lanka and Bangladesh and Delivery of a complete course on “Physical Transportation of money” in Amman, Jordan. Her other consultancies include Global Programme against Money Laundering, Proceeds Of Crime and Counter Financing of Terrorism (GPML) Consultants conference in Vienna, Austria; Training Needs Analysis on the Nexus between Human Trafficking and Money Laundering and Counter Financing of Terrorism. In the framework of the previous AML/CFT project in the GHoA, she has provided her thematic and regional expertise, notably for Institutional training activities in relation to Countering the Finance of Terrorism, or the Conversion of Intelligence to Evidence. She holds a Bachelor of Law degree from the Catholic University of Eastern Africa, a Post Graduate Diploma in Law, a Master’s Degree in Strategic and Security Studies, and a Post Graduate Diploma in Strategic and Security Studies from the University of Nairobi. 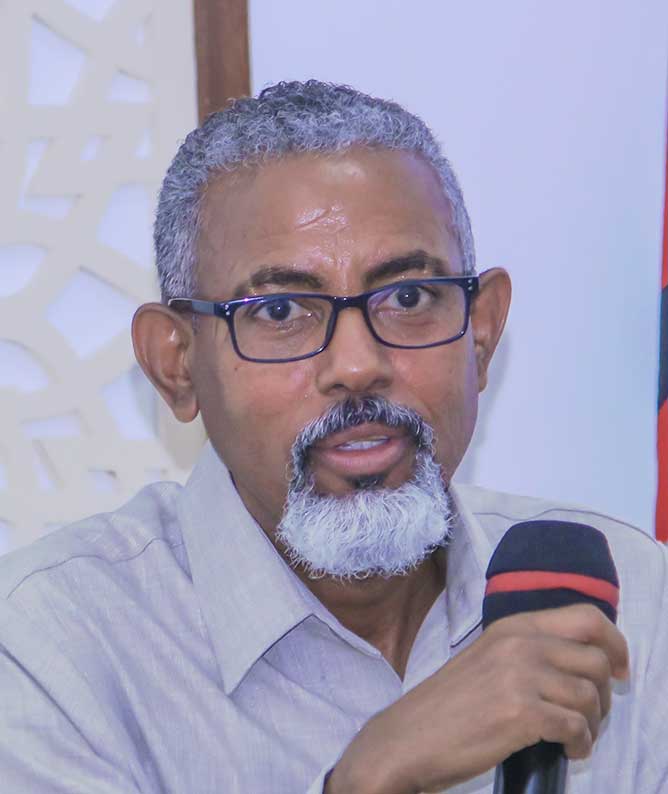 Tuemay is a former police commander with more than 28 years of extensive experience in the fields of policing, security and conflict management in the Horn of Africa. Tuemay has served in different regional and international organisations as a senior expert and researcher/consultant including with the UNDP, African Union and other non-governmental organisations.

Continue Reading
Tuemay joined the Global Center on Cooperative Security between 2011 and 2013 as a lead AML/CFT consultant and Liaison Officer to Intergovernmental Authority on Development (IGAD). Before joining the AML-THB GHoA Project, he was head of Transnational Organised Crime Pillar with the IGAD Security Sector Programme between 2013 and 2019. In 2014, Tuemay served in the IGAD led South Sudan Mediation as coordinator of the Office of the Special Envoy for South Sudan.  Tuemay has designed and coordinated various training, research and mapping studies on transnational organised crime (TOC), particularly in the greater Horn of Africa region. He has authored articles on human trafficking and smuggling, counter violent extremism, money laundering and terrorism financing. Tuemay has carried out research on human trafficking, migrant smuggling, maritime piracy, money laundering, terrorism financing, community policing and border security and management. He also taught various academic courses including strategic management and risk assessment in different universities in Ethiopia.  Tuemay has a Masters degree in Organisation Development and Consultancy from Sheffield Hallam University (UK), Post Graduate Diploma in Security Sector Management from Cranfield University (UK) and MA in Managing Peace and Security in Africa (Addis Ababa University, Ongoing). 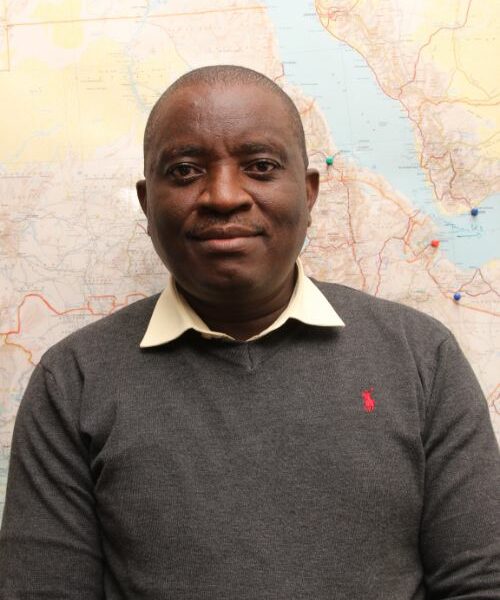 John has over 25 years of working experience in providing finance, procurement, and administrative leadership.

His key qualifications include financial management and reporting, with proven experience in setting up and implementing sound organisational financial and accounting systems and operating procedures. He has over 15 years of practical knowledge in management of donor funded programmes; budget planning, financial administration, coordination of programme audits and contract management of EU – funded programmes. He also has experience in EU procurement procedures and contracting rules, ensuring transparency of operations to obtain the desired quality of supplies, services and works at the best possible price.

Continue Reading
Before joining this project, he held a similar role in the previous AML/CFT project in the GHoA.  John holds a Bachelor of Commerce degree in Accounting from the University of Nairobi and a master’s degree in Business Administration from Jomo Kenyatta University of Agriculture and Technology. 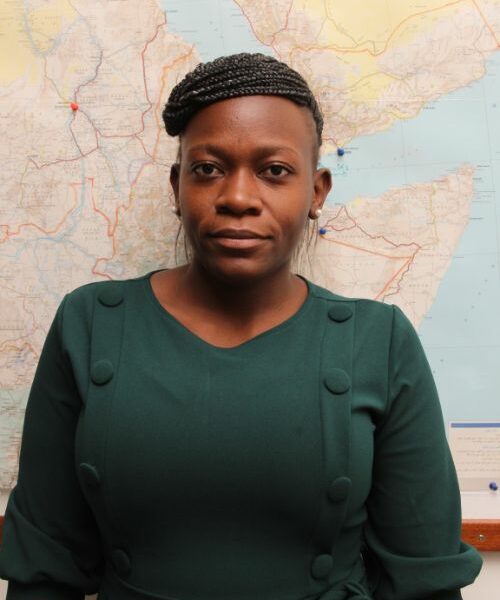 Continue Reading
Faith worked formerly as a Project Coordinator for a Compassion International Funded Project where she was in charge of the overall planning and management of the project. Faith has experience in Budgeting, Procurement, Financial Management and Implementation. She also has vast experience in Human Resource Management Functions such as Recruitment, Training and Development, Performance Management among other related functions particularly in donor funded projects. She also has knowledge of office administration, bookkeeping as well as workshop and conferencing organisation. 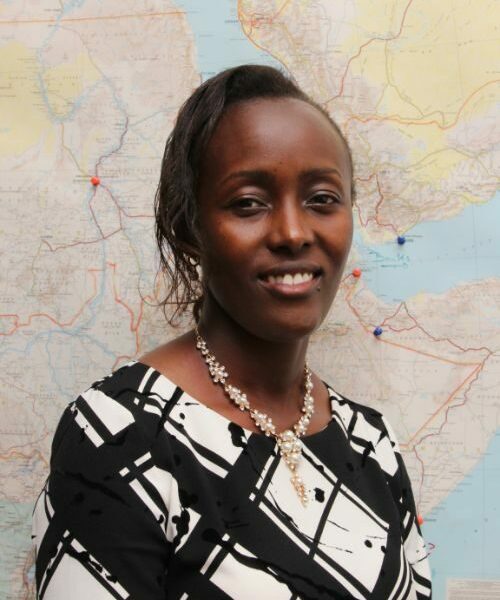 Ruth has more than 10 years of working experience in project administration and management, with extensive knowledge in Project planning and execution, particularly in the framework of EU funded projects. She has also worked with Kenya primary schools in the slums in the position of resource mobilisation. She has a proven extensive knowledge in mapping out project strategies, coordination and implementation of organisation policies within a donor’s scope.

Continue Reading
She has experience in administration procedures, records management, office management and logistics as well as data analysis and interpretation.  Before joining this project, she held a similar role in the previous AML/CFT project in the GHoA.  Ruth holds a Bachelor of Science degree in Information Sciences and a Diploma in Information Technology from Moi University. She also has a Professional Certificate in Geographic Information System (GIS) from Technical University of Kenya and a professional certificate on SAS Statistics from University of Nairobi. 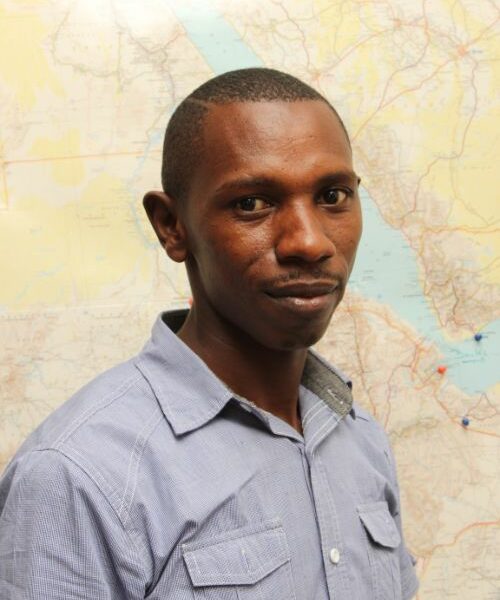 Richard has more than 15 years of working experience in the transport industry with extensive knowledge in executive and defensive driving. He formerly worked for Kenya Pewin Cabs Company as the chief VIP driver and coordinator.

Before joining this project, he held a similar role in the previous AML/CFT project in the GHoA.

Richard is a Grade II driver, a Grade I mechanic and a holder of First Aid certificate.

We use cookies on our website to give you the most relevant experience by remembering your preferences and repeat visits. By clicking “Accept”, you consent to the use of ALL the cookies.
Cookie settingsAccept
Manage consent